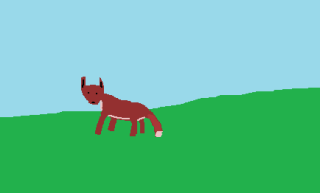 5am, one of those times when neither of us could sleep and neither of us could speak, we looked out her kitchen window and saw two foxes eating each other, each tail in the other’s mouth and the dew making the grass silver and the draft from the back door cold on my bare feet even though it was almost summer.

Each fox gnawed off the other’s hind legs, first the left then the right, as I heard her come up behind me to see, as I heard her breathing, the heat from her body pressed against me in a way it hadn’t for a while.

And then it was the stomachs, each fox eating themselves wrapped in another fox, the early sun glinting off blood soaked coats as the foxes got smaller, right leg then left.  I heard her take another breath like she wanted to say something about the state of living today but didn’t thank goodness.

Two fox heads on the ground and disappearing until I looked back to look at her still staring out the window, and when I turned to face the foxes again, they were gone.

She wrapped her arms around me and whispered something I’ve never told to anyone, something I’ll never forget.

And then we sat at the kitchen table silently debating whether to go back to bed or stay awake and live out the day with those dead foxes as the beginning.