For some, Disneyland is where rainbows shoot out of assholes and dreams really do come true. For others, it’s grinding machines, endless lines and screaming children who are always trying to get their pudgy sticky hands all over you.

The thing about setting is that it’s less about the actual place and more about the characters looking at the place.

No two characters are going to see a place the same way, and in fact, each character’s interpretation of a place will be different depending on his or her mood and the situation that led him or her there. If a character’s father has just died a beach may look one way whereas if she’s been shipwrecked and finally washed up on shore, the same beach may look very different.

Setting grounds us in the world of the book and provides an atmosphere for the story, but that shouldn’t be the only thing it does.

Sometimes when I’m writing I like to picture myself as a high school gym teacher. The kind with a buzz cut and a name like Tanya or Barb who, when you see her at the end-of-year athletics banquet where she’s wrangled her hulking body into a dress, looks so strikingly like a honey badger in drag that you keep at least six feet away from her all night in case she lunges and takes a bite out of your face.

I imagine myself with grey sweatpants
and a silver whistle screaming at the individual aspects of my story from the sidelines:

“You can work harder than this.”

“You’re better than this.”

“Don’t let the rest of the players down.”

EVERY ASPECT OF YOUR PIECE SHOULD WORK TOGETHER TO TELL YOUR STORY. Not just the plot and the characters, but the language, the pacing and, yes, the setting.

You can do more with your beach setting than just outline the lifeguard chair to the right, the logs washed up on shore and the children chasing the dog. Ask yourself how and what your character is feeling and what she might notice about the setting because of these feelings. You can also take into account her personality, her past and the reason she’s here. Describing your setting with this in mind will show not only where your character is, but also who your character is and how she feels about where she is.

Yes, she is on a beach. We know that there’s water and sand and trees, but maybe your character is having a bad day and so she notices a used condom and some cigarette butts buried in the sand, or maybe she’s feeling nostalgic and sees a pink doll’s shoe forgotten beside the sink in the changing room. 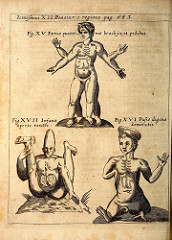