March 24, 2016March 24, 2016
To Amber and Corey
He said the guys he danced with were nice.
He said the guys he danced for thought he was nice.
He told me all this over the telephone while I ate
pancakes and played Jenga.
He didn’t even have to dance.  He could take drugs
or jerk off or whatever, as long as the guys
he danced for wanted to watch.
I’d met him the night before.
My friend had picked him up while we were being escorted out of a club.
The most glamorous way to leave a club is to be dragged out by bouncers.
The most glamorous way to enter a club is with a pyrotechnics display.
They paid a lot of money, those guys he danced for,
watching through computers in New York or Madrid,
and he said that made him feel good,
that they would pay a lot of money to watch him dance
or take drugs or jerk off or whatever,
and I think it was fine.
I didn’t know why he was calling me anyway.
It hadn’t been me he’d been making out with
in the Pizza Pizza across the street from the club, but maybe
I had been the one to invite him to eat pancakes and play
Jenga with us the next day. 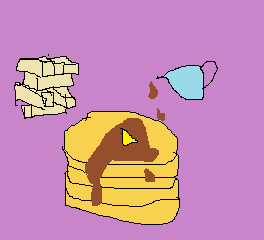 He said he would have come only his train into the city was delayed
so I spoke to him while he waited,
and I think it was fine,
I mean he wasn’t unhappy,
at least any more unhappy
than anyone else in their twenties in a city is.
He said his clothes made him happy.
He had nicer clothes than anyone I know.